The Psion 7530 G2 is available, refurbished. This wireless handheld terminal is an industry standard while it’s enhanced performance comes without sacrificing any of the field-proven ruggedness you trust.  Psion, later Motorola and Zebra’s – the newer version of which is called the 7530 G2, is one of several harsh environment handhelds designed to withstand thermal shock in the cold chain world. 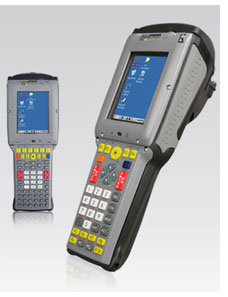 (by Conrad H. Blickenstorfer) The Psion 7530 G2, originally launched around 2007, is a technology update to the company’s near legendary Psion Teklogix 7530 ultra-rugged flashlight terminal, a design with the flexibility and large screen of a PDA.The 400MHz PXA250 processor of the original 7530 was replaced by a speedier 520MHz PXA270 processor in the second gen unit, Windows CE .NET gave way to Windows CE 5.0, and Bluetooth was added. In early 2013, a full six years later and after Psion was acquired by Motorola Solutions in 2012, the second gen 7530 still appears to be an available product, testifying to the amazing longevity and long product life cycles of proven vertical market computing devices.

As would be expected from an ultra-rugged device, the 7530 G2 is rather large and heavy (well over two pounds) handheld that’s engineered for maximum flexibility and expandability, as well as being able to survive use in extreme environments. Despite equipped with plenty of features and technology, the 7530 G2 was designed even back in 2007 to survive 6-foot drops, has a IP67 rating, and can operate in a very wide temperature range of -22 to 140 degree Fahrenheit. Internal SDIO, CF, and PC Card slots provide almost unparalleled expansion flexibility for any wireless technology as well as numerous bar code and imaging applications.

The device is available either with a 37-key “large button” keyboard or a 63-key alphanumeric keyboard. Also of note: the 7530 uses an extra-sensitive 5-wire touchscreen, and there is a very long list of options and accessories, including a tethered RFID reader and a handy pistol grip.